Tulipa tarda is native to the rocky subalpine meadows of Central Asia (steppes of Eastern Turkestan, other sources state that it is an endemic species of Kazakhstan). Bulbs of this species have a thin yellow skin, the leaves are narrow, in a rosette of three to seven grow from underground parts of the stems. The petals are yellow with white tips, outside on a green background purple colored. Several flowers appear on branching stems. Tulipa tarda flowers in the second half of April and early May. The species grows to a height of 15 cm. 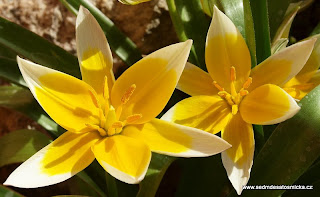 The sowing of seeds is as easy as the cultivation of the tulip. Last year I sowed seeds in early autumn into the soil, scattered several hundred seeds on a half a square meter of land, and slightly earthed them up, and everything else I have left to nature. Although this was a long winter, the seeds germinated in large numbers during March, at the same time as the bulbs of the adult plants started to shoot. Surprisingly, the seedlings coped with the weather in April when the soil froze up at night and during the day due to increasing temperatures above zero again thawed, which lasted if I remember about 14 days to three weeks. When the weather got better a little bit, the "lawn" of sprouted seeds became thicker and wilted at the end of May.
Now I have gathered this year´s seed crop and I have put it up for sale: http://www.sedmdesatosmicka.cz/nabidka-rostlin/semena-seeds/ 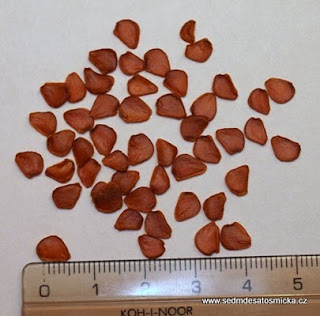 I grow Iris pseudacorus a second year. The first winter I had a plant in a pot at home, because there was no time to deal where to place the plant in the garden in  late autumn. Sometimes I watered rhizomes to soil does not dry out completely. I planted rhizomes into the soil last spring. The plant created about 1 m high leaves but not flowered.
Iris pseudacorus is native to Europe and the British Isles, Western Asia, North Africa, and the Mediterranean region. Although I. pseudacorus occurs naturally in wetland habitats, growing in the garden without specific requirements for wet environments. Owing to an abundant rainfall in this year I do not water the plant.
Stiff leaves remained green through the winter and dried up in late winter and spring. New leaves grew to 1.5m and develop flower stalks usually with three flowers that were beginning to bloom in mid-May. 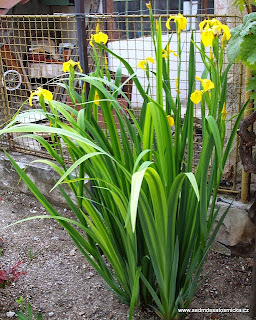 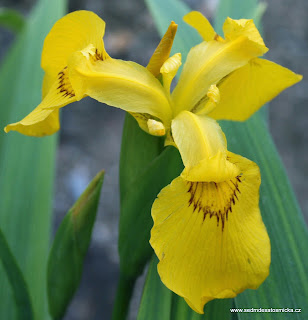 This year I planted Arisaemas into the soil (in the garden) first time. In the earlier years, I've only grown them in pots, but I did not avoid the problem with tubers rotting. We'll see how this season goes well. So far, the plants keep quite well. I worry what will be the course of the weather. It was bad enough that it was quite a long winter. Long winter was followed by a relatively rainy weather and the next weeks weather forecast does not look good. Tubers are planted about 6 square meters. Garden soil I have modified 500 liters Baltic peat and gravel (100 kilograms, fraction:  4-8 mm ). Tubers I put on the gravel and I sprinkled them with crushed charcoal and then backfilled the hole with the soil. If the sun is shining I cover the plants with a netting that have 50% light transmission. 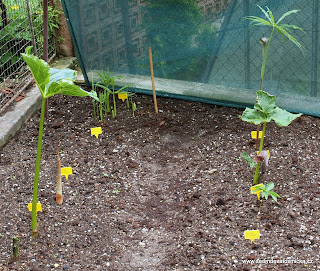 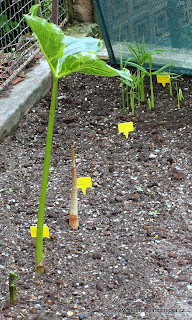 The seeds of the two species I ordered via AGS Seed Exchange. I sowed them on January 1st (L. lankongense), respectively on February 3rd (H. gracilifolius). The seeds of both species germinated on March 13th. I was a little surprised because sown seeds were placed on the stairs to the attic, in the dark, where the temperature ranged between 7 and 12 degrees Celsius.
Lilium lankongense is a species found in northwest Yunnan and southeast Xizang in China growing at altitudes between 1800 and 3200 metres. Normally, the seeds of L. lankongense will germinate within 15 to 35 days (http://www.the-genus-lilium.com/germination2.htm).
In contrast, H. gracilifolius grows in areas with mild climate - la Sierra de los Padres, Partido de General Pueyrredón, Provincia de Buenos Aires, Argentina (Echeverría, Alonso, 2010), southern Brazil, near Torres and Uruguay, near Punta Ballena and Punta del Este (Howard, 2001). Yet H. gracilifolius  is able to germinate at relatively low temperatures. At higher temperatures (around 20°C) but probably germinate faster (Echeverría, Alonso, 2010).

The photos of seedlings are taken less than a month later after germination. The plants are placed under the fluorescent lights that shine only during the day, at 15-18 °C.

Last week I received a shipment of new arisaemas. I had intended to plant bulbs in the garden, but some of them were already sprouting, namely A. nepenthoides and A. griffithii var. pradhanii. Because the weather is bad I planted them in the pots. I had a bad experience with the cultivation of these species yet. The tubers in one season always rotten in the pot. So I was inspired by the advice of Udai C. Pradhan´s book “Himalayan Cobra-Lilies (Arisaema) Their Botany and Culture” and I filled the pots halfway with crushed polystyrene. Then I poured a thin layer of coarsely crushed bark into a pot. I put a tuber on the layer and filled up a pot with substrate. I mixed substrate of light peat, compost and gravel (grain size 4-6 mm) in the ratio 3:1:1. I incorporated into the substrate a preparation against soil and other pests and crushing charcoal (as a disinfectant).

So we will see how arisaemas do well in pots this year….
Vystavil sedmdesatosmicka v 14:31 2 komentáře: